Welcome to the new website for the character known as Sarah Yoshida, mascot for Extreme Anime Radio - an online radio station broadcasting Anime and Japanese Pop music 24 hours a day!

Sarah's character was created in 2008 as a mascot for Extreme Anime Radio's Side Project radio show. Upon a change in station ownership in 2010, Sarah was "promoted" to the role of full station mascot.

Sarah Yoshida is a fun, cool character designed to present Extreme Anime Radio to the public, as well as a character who has faced the odds and never gives up in what she is trying to accomplish. On this website you will learn about the life of Sarah Yoshida, the story behind her development, artwork of Sarah by commissioned and non-commissioned artists, and of course, those who have volunteered their time to cosplay the Sarah Yoshida character. Simply click on the links above to get started!

We hope you enjoy the Sarah Yoshida website, and invite you to visit Extreme Anime Radio to listen to great Anime and J-Pop music. 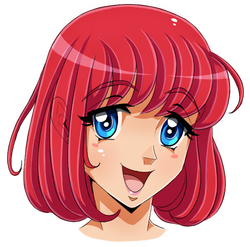 Sarah Yoshida Headshot by DaphInteresting
Have Fun. Never Give Up. These two mottos are what Sarah Yoshida strives to accomplish every day of her life.

Born on November 3, Sarah is the daughter of Japanese clothing designer Junichiro Yoshida and American fitness model Julie Anderson, who met while Julie was on assignment in Tokyo for a local New York City fashion magazine. Junichiro was raised in Odawara, and for years was a popular clothing designer at a major Japanese department store chain before stepping out with his own venture, Yoshida Design. Julie, a native of New York, was a fitness instructor, model and dancer - traits that have been passed on to her daughter.

Sarah struggled while growing up. At an early age, it was revealed that she had a speech disorder. For several years she would attend a special school for communication development in Long Island for a few years. Once Sarah had overcome her hurdle, speech pathologists advanced her to normal studies.

As Sarah grew up some more, she began to learn more about her heritage and culture. Every year, she would join her parents on the 14-hour trip to Japan, visiting with Junichiro's relatives. She began to learn the Japanese language, and when she was ten years old, the decision was made to enroll her in the Japanese school system.

Now fluent in both Japanese and English, Sarah is focusing her schooling in the fields of fashion design and classical dance - things that she took from her parents. After becoming a teenager, Sarah's father sent her for test shoots in downtown Brooklyn. The result of the photo shoot was Sarah's desire to pursue these areas. In the field of fashion, Sarah sometimes helps her father with new custom clothing designs - some of which she will wear or model. Following her mother's lead, Sarah keeps up her fitness with private ballet and gymnastics classes. She is known to pirouette around the room and practice her splits when she has nothing to do. Coincidentally, these attributes have garnered Sarah lots of attention in print material and advertisements. Her dance skills are put to use in her solo engagements at a dance company in upstate New York, whose famous motto is NOSTRUM TRIPUDIO CATERVA EST NIHILUM.

Sarah takes pride in what she does, and while she may be a little clumsy, she's still trying... trying to do her very best while enjoying every moment.

The name chosen for the mascot of the Side Project - and now Extreme Anime Radio - is Sarah Yoshida.

Both parts of the name have significant meaning. The surname “Yoshida” means lucky rice field. Simply put, we’re lucky to have a mascot for Extreme Anime Radio, and Sarah is lucky to be that person. Yoshida is also the last name of some popular Japanese personalities, such as the Yoshida Brothers (Kenichi and Ryoichiro) who are internationally-popular shamisen musicians that blend their music with Western and other regional influences, and renowned Japanese ballerina Miyako Yoshida. The meaning of the given name "Sarah" is "princess".

The mascot’s character was developed by JR back in 2008. Approximately seven months later, the first Sarah Yoshida art designs were used.

Several artists have provided artwork of Sarah on a commissioned and non-commissioned basis. In 2012, the Sarah Yoshida character was opened to interpretation in the world of cosplay, and several talented people have donated their time to perform Sarah in a variety of poses, outfits and situations.